Chef Tom Brown is currently competing in this years Great British Menu and if the food at his restaurant Cornerstone is anything to go by, he’s surely got to be one of this year’s favourites to go all the way.
The restaurant name is inspired by the Arctic Monkey’s track and just like the band themselves, this exceptional place is a number one hit in East London and deservedly so.
It’s a bright, cool, exuberant place bringing as well a simplistic, modern style, where Tom and his team are cleverly creating plates of delicious food smack bang in the centre of the restaurant.

When it comes to the food, Cornerstone champions seafood and due to Tom’s Cornish background, its second to none. Using the freshest produce available, the fish is given centre stage. There’s no faffing around and the ingredients are left to their own devices. Plates including the grey mullet ceviche is as clean and fresh you can get. Tiny cubes of mullet surrounded by super sweet, juicy cherry tomatoes sit in a bowl plate ready for a chilled tomato bath and the gazpacho itself is refreshingly clean.
Even the gurnard is prepared with minimal fuss with sashimi like slices of gurnard swimming around in a sweet sherry vinegar liquor, accompanied with crunchy pieces of almonds and slices of grapes.
Continuing with the cold plates, the mackerel pate is superb stuff. It has a smooth, silky and creamy base with delicately placed shimmering slivers of mackerel, essence of seaweed and paper thin slices of cucumber. It’s a sexy looking dish that’s waiting to be lavishly spread on the muffin shaped treacle bread that comes with it.
As for oysters, well generally speaking they are a definite no from me, but these pickled plump bad boys have changed my mind about them. Usually people do not really care for that fresh, seawater taste, but Cornerstone dress this Cornish delight with pickled gherkin, celery, dill and a drop of horseradish cream. Get it down your throats and like myself, you could be pleasantly surprised.
For something with more meat to it, the curried salmon is a winner. Again it’s another cold option but this firm piece of fish has unreal flavour, coated with delicate Asian spices and seasoning as well as a funky carrot slaw dressed in a mild curry oil. 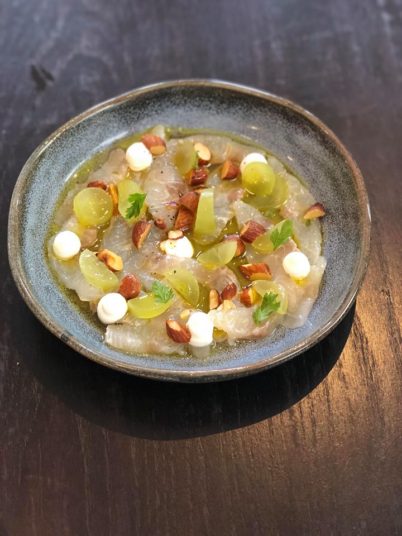 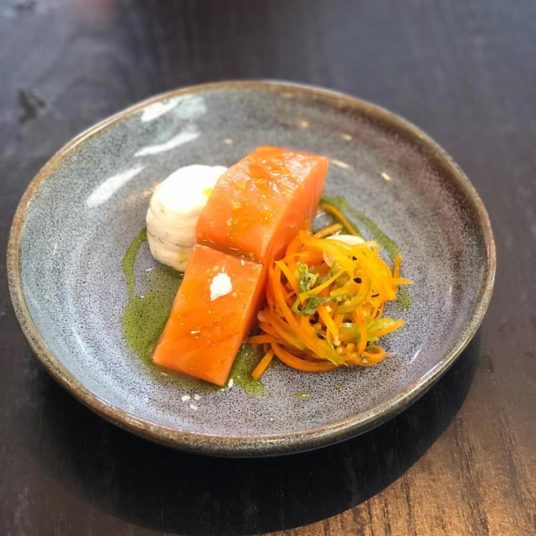 Of course there are warmer plates and there’s nothing better than the cod. An incredible firm, chunky and flaky piece of heaven is joined by a real good dollop of Cornerstone’s creamy and rich hollandaise, a crunchy charred piece of courgette and a golden nugget of battered cod.
Another warm plate that is recommended is a quality smoked haddock tart. From the filling to the base, its just a superior piece of culinary delight. With extra mature vintage cheddar used for the punchy rarebit topping, it just tastes so good and as for the pastry, just buttery and light, crumbly to the touch.
The pastry and bread really does play a key part in certain dishes and Cornerstone’s buttered shrimp is just another example. This cracking little number has butter oozing out from the spongey crumpet base, as well as the tiny specs of shrimp soaking up all of that rich flavour. There’s even a bit of a bite to it as well and the freshly, crisp kohlrabi dressed in gherkin and parsley on top helps to cut through that richness.
Don’t go without the sourdough toast either where it’s laced with good quality olive oil and given a good charring. We liberally spread that soft salted butter all over. 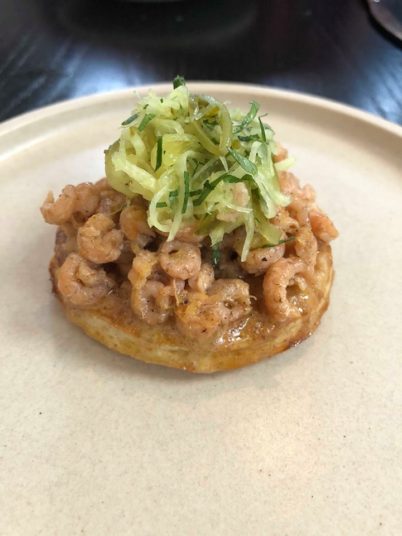 Cornerstone is a top restaurant and one that’s already a massive success. This is what good food is all about, just mouth watering, simple ingredients, given minimal treatment and taking centre stage. With a recommendation of 8 plates to share between 2 people, there is little to be disappointed with and each dish themselves steal the show in their own right.